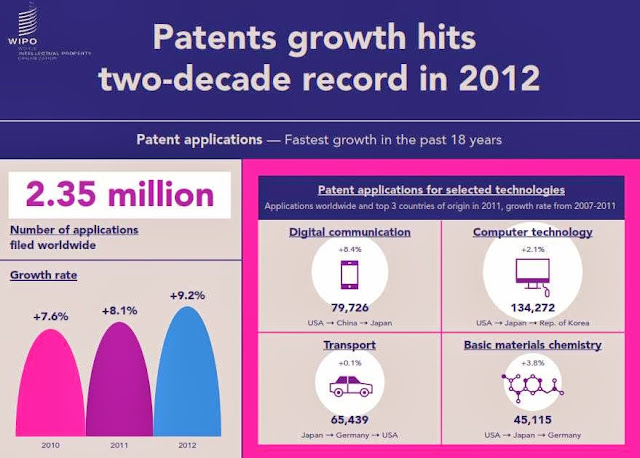 A new WIPO report shows that in 2012 global patent filings increased at their strongest rate in nearly two decades as industrial-design registration notched its best-ever rate of growth. Intellectual property (IP) filings have sharply rebounded since a 2009 decline at the height of the financial crisis.

Patent filings by field of technology differ across origins. Residents of Israel and the US filed a high share of their applications in the computer and medical technologies fields. Applications filed by residents of Belgium, India and Switzerland were more concentrated in the organic fine chemistry field. Resident of Brazil filed a high share of applications in basic materials chemistry, while China and the Russian Federation focused their filings on material metallurgy technologies. In contrast, a higher share of applications filed by residents of Japan, Singapore and the Republic of Korea fell within the field of semiconductors. Residents of European countries such as France, Germany and Sweden focused their filings on transport-related technologies.

Patent filings for energy-related technologies grew by 5.3% in 2012. Applications filed by residents of China Hong Kong (SAR), Israel and Switzerland were highly concentrated in solar energy, while those of Finland, Japan and the UK had higher shares dedicated to fuel cell technology. - WIPO