On 15 Dec 2021, Alexander Nanta Linggi, the Minister of Domestic Trade tabled a Bill to amend the Copyright Act 1987 in Dewan Rakyat, the lower house of the parliament. The first reading was made two days earlier. 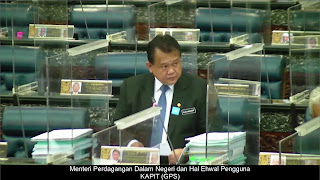 Alexander Nanta Linggi
Parlimen Malaysia
We have compiled YouTube sessions of the tabling, debate and passing of the bill.
[4:11:07] Tabling of Copyright (Amendment) Bill 2021 for Second Reading. The text of the Bill in English and Malay.
[4:19:10] Debate by Members of Parliament: Debate by Members of Parliament: Choong Shiau Yoon (Tebrau), Wilfred Madius Tangau (Tuaran), Che Abdullah (Tumpat), Wong Hon Wai (Bukit Bendera), Sim Tze Tzin (Bayan Baru), Che Alias Hamid (Kemaman), and Cha Kee Chin (Rasah).
Alexander explained that the amendment is in line with Marrakesh Treaty to facilitate access for persons who are visually impaired to published works. He said the treaty provides exceptions in obtaining the approval of copyright owners to make and distribute reading materials in formats that are accessible to the visually impaired community.
Wilfred complained about low royalties received by Sabah musicians. He hoped the decentralization of Collective Management Organizations (CMO) can improve royalty collection. Alexander replied that MyIPO will issue guidelines for CMOs to ensure transparent royalty collection. CMOs are being set up for Sabah and Sarawak, respectively.
Kee Chin noted that a new part is added in relation to streaming technology. He asked if it would be an offence to buy an Android box to view legitimate content. Alexander replied that buying and using the Android box with legitimate service is not an offence. Parties involved in offering Android box that facilitates steaming of illicit content is an offence with a fine of RM10,000 to 200,000 or 20 years of prison, or both.
[5:17:38] The second reading of the Bill was agreed. The Bill was tabled again for third reading and passed.
There are 20 clauses in the Bill which was then tabled in Dewan Negara, the upper house of parliament by Rosol Wahid, the Deputy Minister of Domestic Trade on 22 Dec 2021.
Parlimen Malaysia
[1:34:39] Tabling of Copyright (Amendment) Bill 2021 for Second Reading.
[1:41:38] Debate by members of the Senate: Kesavadas Achyuthan Nair, Mohd Apandi and Hajjah Wan Martina
[2:15:56] The second reading of the bill was agreed. The bill was tabled for third reading and passed.
** The Copyrights (Amendment) Act 2022 is in force since 18 Mar 2022 **
Posted by Dennis at 6:47 PM