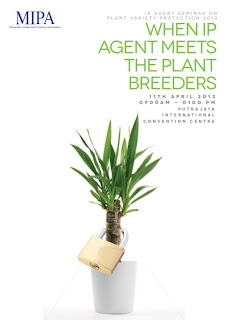 Malaysia, being a signatory to the TRIPS Agreement, has obliged under Article 27.3 (b) by introducing the Plant Variety Protection system in the country as spelt in the Protection of New Plant Varieties Act 2004 (hereafter PNPV act). The Act was enacted in 2004 and offically in year 2008.

The PNPV Act aims to prove Plant Breeder's Right of new plant varieties regardless whether the creation by the conventional breeders, farmers, local communities or indigenous people. The PNPV Act contains manu common features with otehr Plant Variety Protection systems arund the world, but at the same time there are also some fundamental differences.

As spelt in subsection 15(2) PNPV Act 2004, local agent must be appointed by foreign applicants to deal with the Plant Variety Protection Office for any matters relating to application for registration and grant of a breeder's right. In such, Malaysian Intellectual Property Association (MIPA) is organizing an introductory seminar on plant variety peotection at Putrajaya International Convention Center, supported by Department of Agriculture. The seminar will clarify in greater depth regarding the PNPV Act 2004, the scope of protection, the role of agent in Plant Variety Protection System and the procedure of PNPV application. Through the seminar, agents who intend to enroll in providing IP service for plant breeders will be in a better position to assist their potential clients.


To learn more about the event click here: http://www.cvent.com/d/5cqv6k. Register now to ensure your seat.