Infographic: Who filed the most PCT patent applications in 2012? 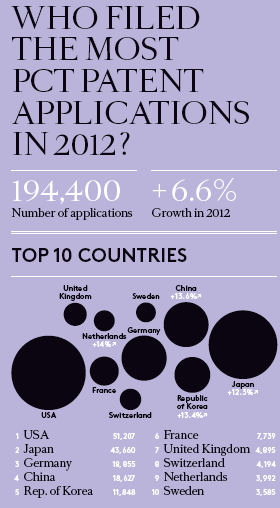 In 2012, international patent applications filed under the Patent Cooperation Treaty (PCT) grew by 6.6% on 2011. Japan and the United States of America (US) accounted for 48.8% of the 194,400 PCT applications filed in 2012. China's 2012 growth (+13.6%) is lower than that of previous two years; this partly reflects the sharp increase in Chinese fillings since 2009, as an enlarged filling base naturally reduces relative growth rates.

Electrical machinery with 13,293 published applications - or 7.5% of the total - overtook digital communications (7.1%) as the field of technology in which the largest number of PCT applications were published in 2012. - WIPO 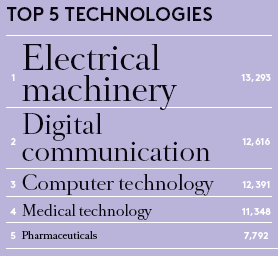