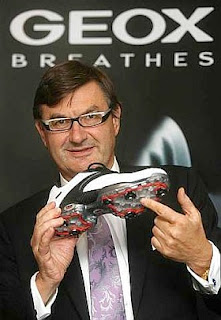 The founder and president of Italy’s largest footwear brand, Geox SpA, shares about his true calling – designing and marketing shoes.

MARIO Moretti Polegato grew up in a family that had been in the wine business for three generations. He even studied wine technology at the University of Ferrara in Italy.

The story goes that one day in the 1990s, after he finished promoting his family wine at an exhibition in Reno (not far from Las Vegas), he went for a walk in the desert. To soothe his overheated feet, he used his Swiss knife to cut holes in his sneakers’ rubber soles. That was his eureka moment.

“Later, when I came back to Italy, I introduced a new (shoe) technology. I utilised a special material that we call the membrane, which is water-proof and breathable at the same time because it is made with millions of micro-pores,” Polegato says.

Immediately he patented the technology in Italy, and today he has patented it in other countries as well, covering Europe, Asia and America.

Not everyone shared Polegato’s enthusiasm, however. “I offered this technology to the large footwear companies in Italy, Germany and America, but incredibly, nobody believed in me.”

In the end he decided to produce the shoes himself in Italy.

He spent three years to find a partner and set up Geox in 1995.

Explaining the name, he says Geo is Greek for earth, “because when you’re walking, the best walk is when you walk barefoot – feet on the ground. X is a technology symbol.”

Polegato started Geox with just five employees, all from the Montebelluna area, which is about 7km from Crocetta del Montello.

The employees were assigned specific responsibilities, from marketing to production. Today, 14 years hence, Geox employs directly and indirectly 30,000 people (including those employed by companies contract manufacturing its products) and is listed on the Milan Stock Exchange.

“Entrepreneurs should invest more in innovation, collaborate more with universities, and invest more in young people, because this is the key to win against the competition in the future,” he says.

Polegato, who has taught on intellectual property in various universities, emphasises the importance of creativity. “An idea,” he states, “is worth more than a factory.”

Polegato believes that everyone can walk in his footsteps and be as successful.

“Everybody has the possibility to repeat my experience, my story, because everybody has a brain that can be utilised.” -StarBiz
Posted by Dennis at 12:11 PM