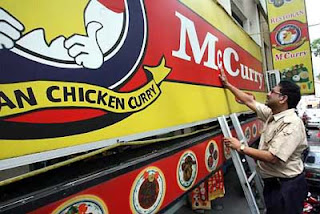 The Federal Court ruled Tuesday that McDonald’s cannot appeal against another court’s verdict that had allowed McCurry to use ‘Mc’ in its name. The owner says McCurry, which serves Indian food, is an abbreviation for Malaysian Chicken Curry.

The ruling by a three-member panel of the Federal Court ends all legal avenues for McDonald’s to protect its name from what it said was a trademark infringement.

McDonald’s will have to pay RM10,000 to McCurry, a popular eatery in Jalan Ipoh on the edge of Kuala Lumpur’s downtown. McDonald’s lawyers refused to comment, except to say the company will abide by the judgment.

McCurry lawyer Sri Devi Nair said the ruling means McDonald’s does not have a monopoly on the prefix ‘Mc,’ and that other restaurants could also use it as long as they distinguish their food from McDonald’s.

“This is a precedent for everyone to follow,” he said. The Appeal Court said McCurry’s signboard has white and grey letters against a red background with a picture of a smiling chicken giving a double thumbs-up, in contrast to McDonald’s red and yellow “M” logo. McCurry also serves only Indian food, not competing with McDonald’s Western menu, the court said.

The recent McDonald's v. McCurry ruling is not surprising. Just by the three main DuPont factors alone, appearance, sound and meaning, these two marks are arguably not confusingly similar. Add to that the difference in menus, and the difference in trade dress, and you have a pretty strong case for McCurry, which the panel seemingly accepted. The letters "Mc" cannot be totally, exclusively owned by one entity worldwide. And it's not as if people are going to mix up McCurry with McDonalds. Now, if McCurry used the golden arches, had a clown and similar characters associated with the restaurant, that would be problematic. Those elements were not present in this case. On our site, http://www.trademarksprotected.com, we help with these trademark issues and any trademark questions.