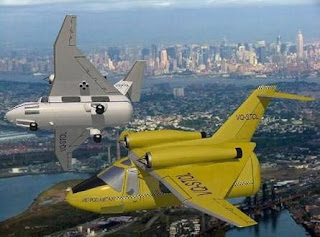 Newly-assembled aircraft Jetpod, by the British-based Avcen Ltd, crashed and burst into a ball of fire during a test flight from Tekah airstrip near here, killing its inventor Michael Robert Dacre, 53, who was piloting the aircraft.

Avcen Limited Malaysia is based at Patimas Technology Centre, Technology Park, Bukit Jalil, Kuala Lumpur and Dacre had intended for the 8-seater flying taxi to be ready in 2010.

The incident was witnessed by many residents, including retired soldier, Halim Hamid, 50, who lives in nearby Taman Saujana Jaya.

He said he was scooping shrimps to feed his pet fish at a disused pond about 50 metres from where the jet had crashed.

“Earlier, I saw it going down the runaway three times but it could not take off.

“However, on the fourth run, the jet took off into the air but at about 200 metres high, it shot vertically to the sky before veering to its left and then falling to the ground,” he said.

There was a loud explosion when it crashed but firemen who were at the scene managed to put out the blaze, he said.

Halim said the jet had been earlier transported in parts in a container to the airstrip about a week ago before it was assembled.

Police personnel at the scene were seen collecting the pilot’s burnt, dismembered limbs from the wreckage before sending his remains to the Taiping Hospital.

Some of the residents said a co-pilot had wanted to accompany the deceased on the test flight but Dacre decided to fly alone.

Several Royal Malaysian Air Force personnel were at the scene to check the wreckage.

Meanwhile, Bernama quoted Taiping Fire and Rescue senior operations officer Mohd Sobri Abdullah as saying that the fire and rescue personnel had been stationed at the airstrip since 8.30am on the request of the company.

He said the plane was at an altitude of 200 metres when it suddenly plunged to the ground and erupted into a ball of fire.

The fire and rescue personnel present provided emergency response but were unable to save the victim, he said, adding that investigations had commenced to determine the cause of the crash.

According to Wikipedia Jetpod is a design proposal for a very quiet aircraft that can take off and land in short distances (STOL), developed by Avcen Limited, a company formed in 1998 to promote development of the Jetpod.

A number of applications have been proposed, including as a military transport, an executive transport, and as a short to medium-range air taxi.

It would need only 125 meters (135 yards) to take-off or land, allowing runways to be constructed close to the center of major cities, and would be sufficiently quiet to not be noticeable above city traffic.

The trip from Heathrow Airport to central London would take about 4 minutes and cost about $100. -TheStar
Posted by Dennis at 8:58 AM