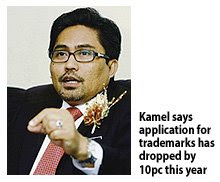 A SLOWDOWN in the economy should not inhibit people from being creative and innovative, Intellectual Property Corp of Malaysia (MyIPO) director-general Kamel Mohamad said.

Rather it gives them more time to be creative and innovative in coming out with distinctive and stronger designs or brands.

"This is the time to invest in creativity and innovation because you need to prepare for the next wave of economic recovery," he told a news conference in conjunction with Educational Workshop on Non-Traditional Trademarks in Kuala Lumpur yesterday.

"If you wait for the economy to recover, you may find that others have already filed for the same registration, while designers would cost more," he said. Kamel said the first two months of this year saw about 10 per cent drop in applications for trademarks by local and foreign companies compared with the same period in 2008.

In January this year, MyIPO received 1,383 filings for trademark registration from local and foreign companies, compared with 2,010 in January last year.

Kamel attributed the downtrend to the current economic situation.

MyIPO, a corporatised entity under Domestic Trade and Consumer Affairs Ministry, is currently reviewing the existing intellectual property (IP) laws in the country to make them relevant to the changing environment.

Kamel said MyIPO is considering expanding the scope of definition of trademark in the Trademarks Act 1976 to include non-traditional trademarks such as sound, smell, shape, taste and texture.

The current conventional marks include letters, words, logos, pictures, symbols or combinations of these elements.

The amendment to the Act is expected to take place within three years.

Kamel said MyIPO is currently consulting with all IP stakeholders for the revision of the law.

"We have to strike a balance between protecting IP owners and promoting creativity. We don't want to create a monopolistic situation that restrains creativity of others," he said. - Business Times
Posted by Dennis at 12:34 PM