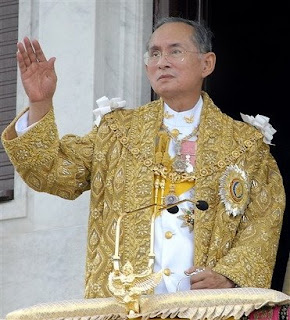 The King of Thailand, His Majesty King Bhumibol Adulyadej, received on January 14, 2009, the WIPO Global Leader Award in recognition of his extraordinary commitment to promoting intellectual property and his important contribution to society as a prolific inventor. The award was presented by WIPO Director General, Mr. Francis Gurry, at a ceremony at the Klai Kangwon Palace in Hua Hin, Thailand. Members of the Privy Council, ministers, senior officials and a high level WIPO delegation were in attendance.

In a citation, Mr. Gurry said “In sharing the fruits of your creativity in the form of invention and musical and artistic works, Your Majesty has not only demonstrated the power of intellectual property to enrich and enhance the quality of daily life and work but has also encouraged people everywhere to create, respect and protect it.”

The King of Thailand is an acclaimed artist with a portfolio of over 1,000 works, including paintings, photos, musical and literary works. He is also an accomplished inventor holding over 20 patents and 19 trademarks. Many of the King’s inventions, which include a water aerator and artificial rainmaking technology, have generated concrete and practical benefits for rural communities in Thailand. - WIPO
Posted by Dennis at 6:17 PM