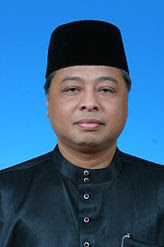 A new cabinet was formed by our fifth prime minister, Najib Abdul Razak. The new person appointed to take over Domestic Trade and Consumer Affairs Minister is Ismail Sabri Yaakob.

“People want to see results from this ministry. They can easily gauge our KPI (key performance indicators) because we manage and control prices of everyday goods,” he said. Ismail Sabri added he planned to continue measures taken by former minister Shahrir Abdul Samad whom he described as an experienced senior leader.

Ismail Sabri was the Youth and Sports minister. With a law degree form Universiti Malaya, he started practice as a lawyer in 1985. In 1987, he was appointed as Temerloh district ofiicer.

Intellectual property is administered by the Ministry of Domestic Trade and Consumer Affairs.
Posted by Dennis at 11:40 AM