This article covers the role of intellectual property in sports.

What are intellectual property (IP) rights?

World IP Day is celebrated to highlight the role of intellectual property in encouraging innovation and creativity. Last year, the theme of ‘Women in Innovation and Creativity’ was celebrated.

What is the role of intellectual property in sports innovation?

Modern golf originates from medieval Scotland. In 1618, James Melvill, a golf ball maker get a 21-year monopoly to make golf balls. Melvill’s golf ball was made of cow or horsehide stuffed with feathers. However, the ball is useless when it got wet. It was also labour intensive to make the ball.
In 1843, Robert Paterson invented gutta percha ball that lower the cost of golf balls. It also lasted longer and less vulnerable to moisture. It increased the popularity of golf as a sport. Gutta percha is a form of latex from Malaysian forest.

In 1899, Coburn Haskell obtained a patent for rubber wound ball. The ball was made of solid rubber wound core that was covered by gutta percha.

Balls in football used to look like basketball before Adidas introduced the Telstar ball in Euro 1968. The Telstar has 32-panel leather ball with white hexagons and black pentagons that bore resemblance to Telstar satellite. The striking black and white arrangement made the sports enjoyable over television. As a FIFA sponsor, Adidas introduces a new ball for each World Cup. Adidas introduced Tango ball, another classic ball in 1978.

How does sports innovation affect me?

The human foot is a complex biomechanical machine. Foot tendon and bone need to withstand daily human activity. Today, most shoes are bought based on the length of heel to toe. Charles Brannock has a better way to measure foot fit.

In 1927, Brannock filed a patent for foot measuring instrument, which was granted as US patent 1725334. Other than the length of heel to toe, the device measures arch length and the width of the foot. These two parameters can enhance comfort and fit of shoe. With proper fit, athlete can focus on their activity with greater confidence and performance. The Brannock measuring device is still being used in shoe retail store, worldwide. Do you know the arch length and width of your foot? 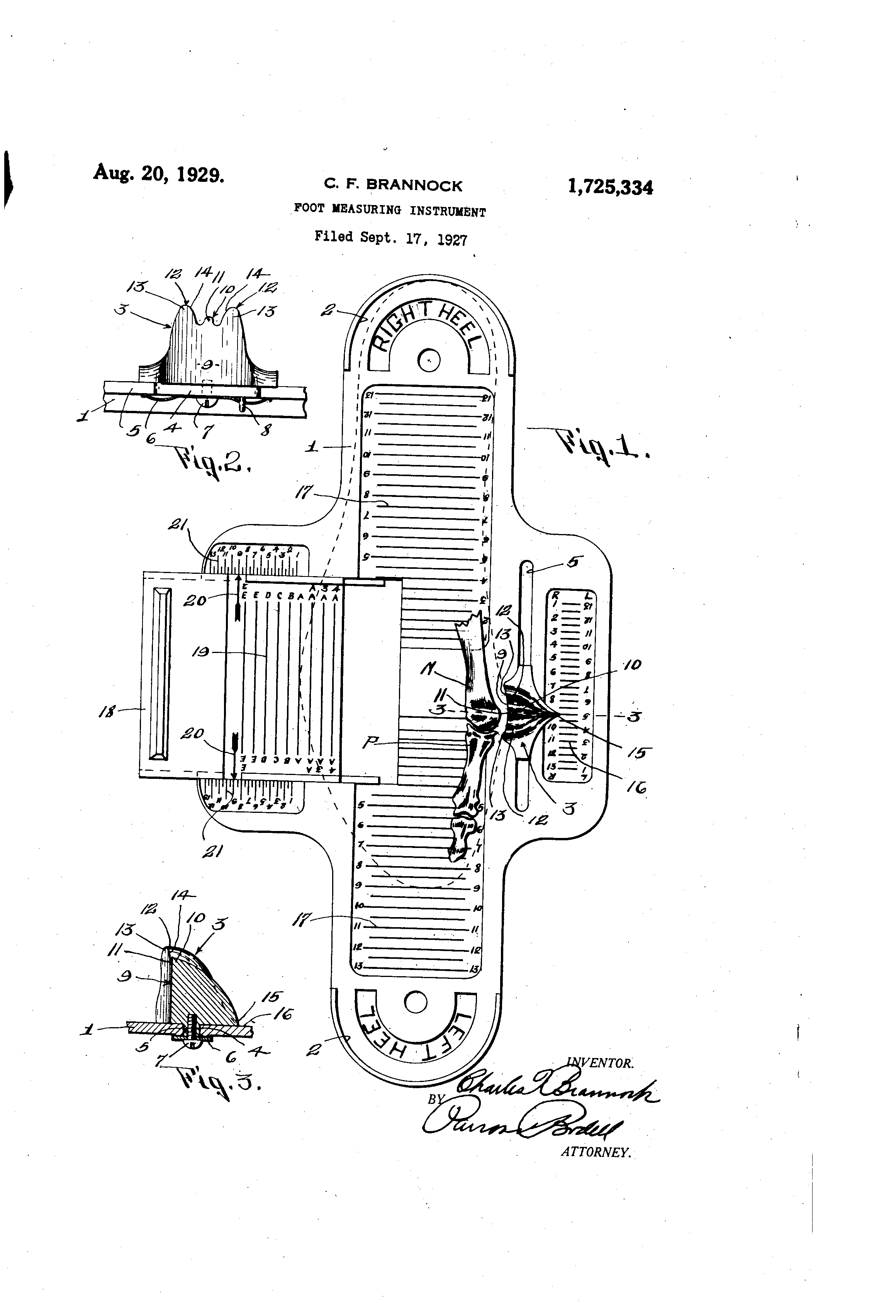 Illustration of US patent 1725334 by Charles Brannock. The device is positioned to measure length of heel to toes as 9, arch length of right foot as 9 and foot width A.

Sports club brand such as Arsenal, Liverpool and Real Madrid are also protected by trademark.
Trademarks can be licensed to create merchandise. Fans of sports usually buy a particular brand to indicate sense of relationship towards the brand. The fan would not hesitate to proudly show use of products with such brand.

Sports venue has limited seats. Popular sports event have valuable broadcast to reach many fans. The popularity of particular sports event is in direct proportion with the value of a broadcast. When an activity has high broadcast or reach, sponsors will come knocking on the door for product placement.
Rupert Murdoch recognises the value of sports broadcast. He promoted the English Premier League broadcast to the world which directly affects the fortunes of clubs in the league.

I was a school quartermaster in Sekolah Aminuddin Baki, Kuala Lumpur. We organised annual sports event for sports club and raised substantial money for the sports activity. The trophy of event, Piala Tuan Haji Mokhtar, was named after the school principal.

We know how to admire good quality brands. Have it occurred that we can develop our own brand? How much are we willing to invest in developing own brand?