His Majesty the King as inventor and innovator 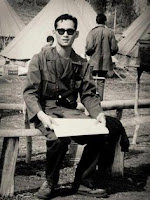 "VILLAGERS have said that miracles happen wherever the King treads. Arid land becomes fertile once again."


To the uninitiated, it must be tempting to dismiss this approximate translation of a Thai radio spot as worshipful hyperbole. Yet to Thais, apart from the obvious affection towards their King, the statement contains a very real element of truth. For over half a century, His Majesty King Bhumibol Adulyadej has applied his technical ingenuity and resources to improving the lives of his people, in particular farmers otherwise at the mercy of nature. His inventions have helped make droughts more bearable, water less polluted and innovation more widely appreciated.

What the Thai people have long known has again been given due recognition by the outside world.

WIPO, a United Nations specialised agency with 184 member states, announced in January 2007 that His Majesty would be the first recipient of this award - its most prestigious recognition of outstanding contributions by world leaders to the cause of intellectual property to promote development.

In its press release, WIPO acknowledged His Majesty's "remarkable contribution to intellectual property both as an inventor and as an active proponent of intellectual property as a tool for development", also noting him as an artist who has "created over 1,000 works including paintings, photos, musical and literary works such as songs and novels".

Some of His Majesty's best-known projects relate to artificial rain. Rain-making techniques invented by His Majesty, with such memorable names as "sandwich" and "super sandwich", have brought welcome moisture to land parched by drought, and relief to thousands of farmers.

The Royal Rain Project, as it is called, is one of the more than 4,000 royally-initiated development projects to date. Others include those pertaining to irrigation, farming, drought and flood alleviation, crop substitution, public health, distance learning and employment promotion. - Government of Thailand
Posted by Dennis at 3:42 PM