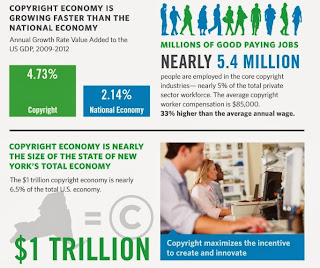 Copyright industries added over $1 trillion in value to the U.S. economy in a single year, accounting for almost 6.5% of the total U.S. GDP, according to a new study released today by the International Intellectual Property Alliance® (IIPA®). The study tracks the economic impact and contributions of U.S. industries creating, producing, distributing, broadcasting or exhibiting copyright materials, including computer software, videogames, books, newspapers, periodicals and journals, motion pictures, music, and radio and television programming.

The study, Copyright Industries in the U.S. Economy: The 2013 Report, was prepared by Stephen E. Siwek of Economists Incorporated for the IIPA, and updates 13 previous studies. It is based on data from the Bureau of Economic Analysis and other government agencies and it demonstrates the vibrancy of copyright and creativity as an engine for growth for the U.S. economy. In reaction to the study, Representative Judy Chu, co-chair of the Congressional Creative Rights Caucus, said: “This study demonstrates that not only do U.S. copyright industries develop the creative works that inspire and entertain so many, they also provide high paying jobs and spur economic activity, consistently contributing to a trade surplus and adding substantial value to our GDP."- IIPA
Posted by Dennis at 11:19 AM