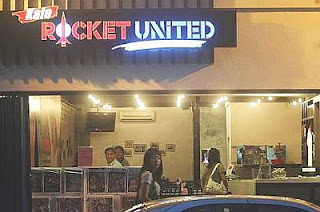 The DAP central executive committee has given its approval to a group of party members and supporters to set up the Rocket United Cafe in SS2/63 here and use the party’s logo on its signboard, said the head of secretariat for the DAP secretary-general’s office, Foo Yueh Chuan.

She said the approval from the Petaling Jaya City Council (MBPJ) was secured for the cafe’s signboard and business premises on Aug 18, adding that the objective of the cafe was for the party to increase its reach to Malaysians.

“It is also to make available services such as voter registration and the registration for state benefits, such as the Mesra Usia Mas and the Tabung Warisan Anak Selangor,” she said in a statement here yesterday. -The Star
Posted by Dennis at 12:41 PM