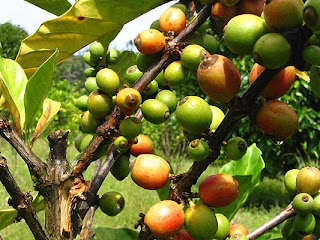 Tenom coffee bean
Geographical indications (GI) is widely used in Europe to protect wines, spirit, cheese and chocolate products. GI is specifically related to a district or state's agriculture produce. As of April 2009, there are six registered GI in Malaysia namely Sarawak pepper, Sabah tea, Sabah seaweed, Sabah virgin coconut oil, Tenom coffee and Bario rice. Tenom is a rural town of Sabah while Bario is a part of Sarawak.

Sarawak pepper has a distinctive flavor and taste that has gained international recognition by chefs and gourmets as one of the most favorite pepper ingredients. There are various pepper products such as pepper candies and pepper perfume that won't make you sneeze.

Sabah virgin coconut oil, to some researchers, is the healthiest dietary oil on earth. Clinical studies have shown that lauric acid, present in virgin coconut oil, has anti-microbial, anti-viral, anti-fungal and anti-bacterial properties, making it a miracle healing oil.

The Tenom district is famous for its coffee, Tenom Robusta. The coffee is cultivated, and roasted with butter and salt in Tenom.

Bario Rice is regarded by the natives as the finest and best rice from the highlands of Sarawak. It is grown on cool climates at an elevation above 1,200 metres. It is believed to be the finest rice grains of the world. It is famous for its soft texture, fine and elongated grains with mild aromas and splendid taste.